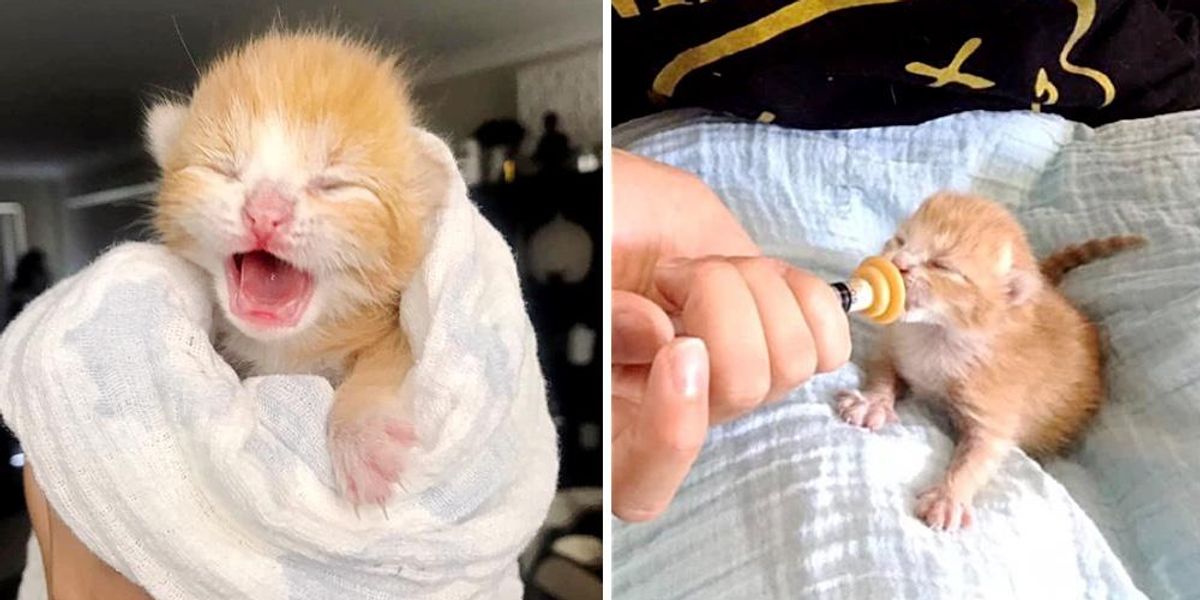 A kitten who was found in a garden bed all alone, now has a sweet cat family to cuddle and love on.

In early December, Tara, founder of The Mad Catters (a cat rescue in Perth, Australia), was contacted about a ginger kitten needing rescue. The little neonate was about 4-5 days old, found crying in a garden bed without a mother in sight.

They looked around for other kittens but couldn’t find any. While they continued trying to locate the mother, the hungry little kitten was kept warm and taken into foster care with Tara.

“He weighed 173 grams and was immediately suckling his formula down like a pro,” Tara shared.

The kitten named Cobain quickly perked up with good food and a warm, cozy nest. The little bundle of fur was fed and cared for around the clock. He had a voracious appetite and an amazing will to live.

“Every two hours on the dot, he would happily scream at me for his meal,” Tara added.

Cobain refused to be alone and insisted on being with his caretaker at all times. He would cry until he was held or cuddled snugly in a purrito.

Knowing that the kitten could really benefit from having a mom and feline siblings, Tara began a search for a surrogate cat mom.

Around that time, a white and grey cat named Cinque was brought into a shelter when she was heavily pregnant. They couldn’t find a microchip and no one came forward to claim her.

Two days later, she gave birth to a litter of five kittens in a safe environment, away from the outdoors.

Impound Feline Rescue, a local rescue, took them into their care, so the sweet momma cat could have a comfortable home to raise her babies, and a loving foster family to cater to her needs.

When the rescue learned about Cobain the little singleton, they didn’t hesitate to help. They brought the new baby to Mama Cinque and hoped she would accept him.

“As he was not too much older than Cinque’s babies, the hope was that Cinque might accept this lil ginger as an extra mouth to feed,” Impound Feline Rescue shared with Love Meow.

“To everyone’s delight, little Cobain was quickly accepted into the grey and white gang, and so the litter of five became a litter of six.”

The cat took him in as her own and showered him with the motherly love that he desperately needed. That night, little Cobain was tucked away safely and comfortably in the middle of his new family.

“Cinque is such a doting mama cat and took to him right away. He will now have siblings and a mother to learn important behavioral and social skills from, as well as the best possible nutrition for growing kittens,” Tara added.

The ginger boy is thriving with the abundance of care from his new mom and feline siblings to wrestle and snuggle with.

Cobain is little larger than his new siblings. They enjoy cuddling up in a pile, and the younger ones like to use their big brother as their pillow.

“It’s almost always better for kittens to be fed and raised by a kitty mum instead of being hand-reared, if possible,” the rescue said. “We are thrilled that things went well with introducing Cobain to Cinque.”

The sweet ginger no longer has to cry for attention or cuddles as he now has a big family to lean on.

Related story: Kitten Found in Backyard Has the Sweetest Face and Fighting Spirit