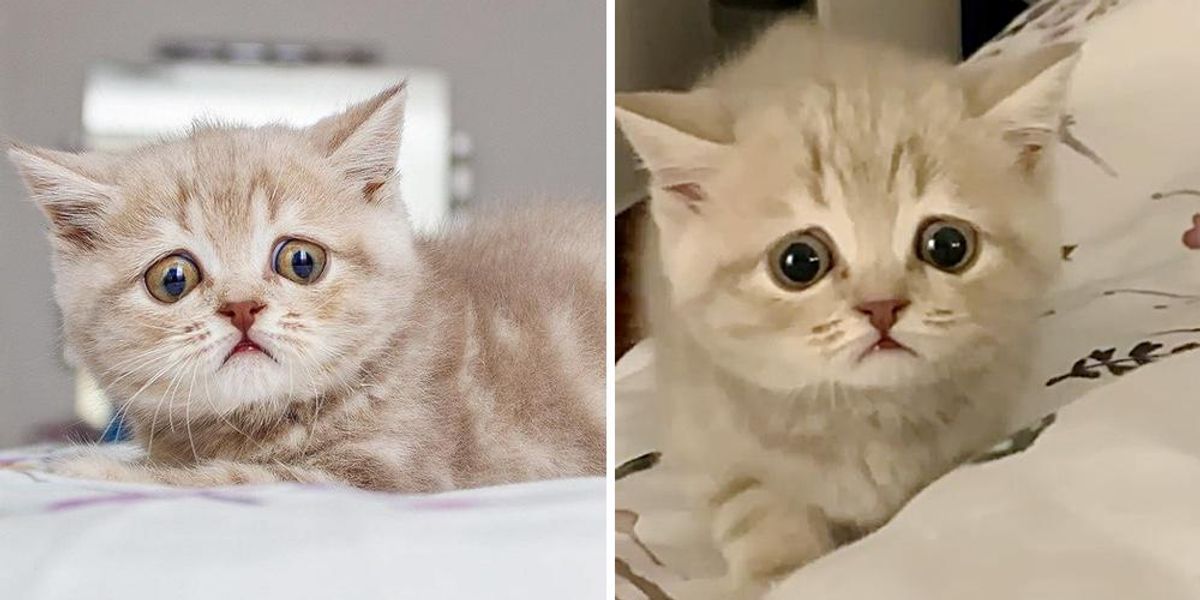 A kitten with a pair of big doe eyes flew across continents to be with the family of her dreams.

Last fall, Laila D’Souza, founder of Winston Memorial Foundation in Kuwait, rescued a tiny kitten from a difficult situation. “She was separated from her mom and sold to a family at just one week old. She was really sick and infested with worms and intestinal problems,” Laila shared with Love Meow.

The kitten was surrendered to the rescue at four weeks old and in need of critical care. Laila didn’t hesitate to take her in and immediately started treating the kitten. The little bundle of fur was so thankful to have someone to help her.

With supportive care and lots of TLC, Mia perked up and began to improve. “I knew she was going to be alright the moment she was in my arms, safe from abuse and neglect.”

As Mia was on her way to a full recovery, she became a ball of energy and the princess of mischief. The sweet kitten took a liking to Laila’s resident dog, Leya, and would practice pouncing and even wrestling with her canine friend.

Being pint-sized didn’t slow her down. The fearless kitty held her own when she played with Leya who was much bigger in size. Leya encouraged Mia to explore and try new things, and watched over her every step of the way.

For the first time in her life, Mia was happy and healthy. Her appetite soared and energy level multiplied. When it was time to feed, Mia preferred diving head first into the bowl so she could swim in the food while devouring it.

When her eyes were locked on a moving object, she would wiggle her hindquarters back and forth before unleashing a powerful pounce.

Mia gave this very serious look before every “attack”, and showed intense focus in those big, wondrous eyes.

“She is very playful, loving, and curious. She always has those big worried eyes whenever she tries to hunt something, and it’s so cute,” Laila shared with Love Meow.

The sweet kitten quickly mastered the art of pouncing. Whenever she got the zoomies, she had this irresistible look on her face.

Mia made a complete 180 and was thriving in foster care as a healthy, spoiled kitty.

Watch the kitten in this cute video:

She befriended another foster kitten, Leo, and the two quickly hit it off. They helped each other learn to socialize by doing all sorts of kitten things.

A few days before Christmas, Mia, her buddy Leo and five other rescued cats from Kuwait embarked on a journey to America for their forever homes.

Petey and Furends and 4Paws Rescue Team, animal rescue groups based in the Greater Washington D.C. area, extended their help and gave these deserving kitties a chance at a better life.

When Mia landed safely in the capitol city after a long journey across continents, she was welcomed by local rescuers and volunteers.

She enjoyed her first holiday season in the US, and soon would cross paths with the family of her dreams.

After ringing in the New Year, the sweet kitten was officially adopted into the family that she’d been waiting for.

Mia adores her forever home and is already soaking up the love from everyone in the house. Now, she has a cat buddy to show her the ropes and cuddle with every day.

Mia has quickly claimed the softest bed in her new abode and spent a lot of time playing with her human sister.

“I am so happy for her and how far she’s come,” Laila said.

Related story: Kitten Found Alone on the Street, Meets Dog and Insists on Being His Friend

ISFM International Feline Congress Goes Virtual Again for 2022
Inside the Mind of a Cat Documentary Coming to Netflix
What Does Jeremy Wade Do for ‘FUN’ When Not Fishing? | River Monsters Live
Just One Bite Could Infect This Cat With FIV | My Cat From Hell
How to Care for an Elderly Cat | Cat Care