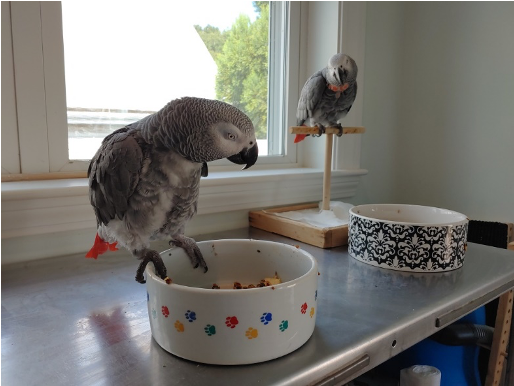 Parrots are prey animals—in the wild, they must always be on guard against numerous predators. Obviously, each species has its own specific vulnerabilities, depending on where it lives, but whether the predator is a hawk, an owl, or a carnivorous cat, sentinel behavior is a way of life, and something that seems to be innate. Alex, for example, was domestically bred, had never been in the wild, and yet was so completely spooked when he noticed a tiny screech owl on the porch of my house—constantly repeating “Wanna go back,” even after it was hidden from view—that we had to abruptly end one of his few sojourns from the lab (Pepperberg, 2008). He was frightened but, thankfully, trusted me to get him to what he perceived would be safety.

Birds living in captivity are completely dependent upon their humans, and unless they can fully trust their human caretakers, they will not form a solid bond with them. These birds must trust that their humans will provide an appropriate diet and fresh clean water on a daily basis, because they cannot forage on their own. If they find themselves hungry or thirsty, as far as they are concerned, that trust has been broken.

They are dependent on their humans to provide activities and companionship; in the wild they spend their days foraging, bathing, and always interacting with other birds (in both friendly and aggressive ways), birds with whom they trade watch-periods, sharing the chore of acting as sentinels against predators. If they are left alone for long periods, they then must themselves constantly be on alert to keep safe from predators, and will likely have less trust that their human companions will “have their back.”

With An Eye to the Outside

Although most birds I know enjoy ‘sunning’ themselves in front of a window, they also are very aware of outdoor predators (see a previous blog on hawks); they thus must trust their humans not to place their cages directly against a window. And if the cages are positioned that way for enrichment or because no other options exist, it is important that they can trust their humans to draw shades or cover their cages at night to provide security so that they can rest peacefully. Some parrots are happiest if a towel covers a small portion of the cage at all times to give them a sanctuary area.

I find it interesting that Griffin—and Alex before him—seems to wait to do much of his preening until I or certain students come into lab; I think it is because he recognizes whom he can trust to keep watch so he can concentrate on his feathers. I think that is also why I’ve found that students must spend many weeks caring for the birds, doing mundane chores, before the birds will do any experimental trials for them: While involved in a task, the birds can’t take their attention away from the experiment to watch out for their own safety, and have to trust that the students will keep them protected; that trust is built while the students learn to care for the parrots’ needs.

And although my birds can talk to me in English and express many of their desires, it also appears that they—and likely many pet birds—understand more than they can express vocally. One of my students noticed that, in situations in which Griffin didn’t want to climb or was being aggressive because he thought something he didn’t like was going to happen (e.g., she was trying to get him to climb off his cage near to the time when he usually got a shower or his medications, etc.), if she specifically told him she was not going to do shower/meds/etc…he  would pause, tilt his head, and then lift up his foot and deign to climb. The same student had a similar experience with Athena, who loves to crack open almonds but sometimes ends up with a beak-resistant nut: The student would offer to retrieve and open those nuts for Athena, but it took several tries before Athena understood that the student wasn’t trying to steal the nut, but rather was trying to be of assistance… Eventually, if Athena was struggling and the student held out her hand and said “Can I help?” Athena would drop the nut onto the human palm and wait patiently to get it back.

And, of course, the need for trust works both ways. For example, if Griffin really doesn’t want to climb, he gives me a gentle nip (something Athena is slowly learning)—his way of saying “No”—and I have to trust that he has a good reason for his behavior. It often turns out that it is something like his needing to finish eating or getting a drink before being willing to engage in some other activity.

It is very clear that humans must take the time to understand the basic reasons for the behavior patterns of our avian companions. If we do so, we can be rewarded with a very special bond.

Men Face Huge Fines For “Illegal Tidepooling” | North Woods Law
Kitten Spotted Underneath Homeowner’s Deck, is Welcomed in By a Cat and Raised as Her Own
Saiga Conservation Alliance’s Recent Visit to Resurrection Island
How to Care for an Elderly Cat | Cat Care
Did you know I’m on Cameo? #shorts