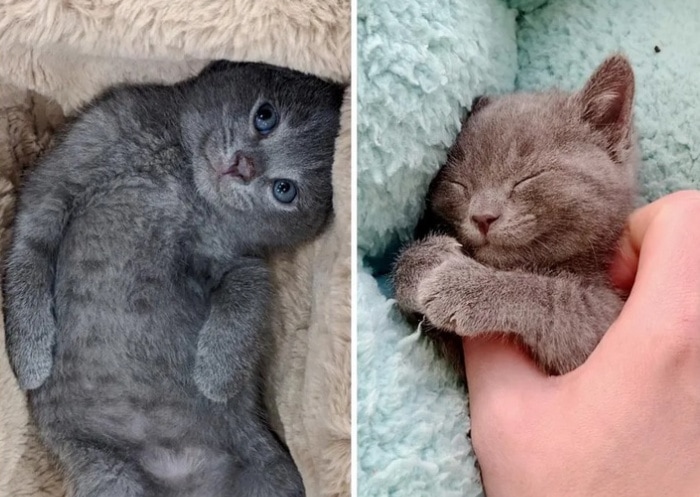 Two kittens rescued separately ended up at the same shelter in New York, and became best friends when Jess Thoren, a fosterer from KittenBnB in New Jersey, took them home. Jess had come to the shelter to rescue another litter of kittens and just knew she had to take little Frankie home as well. Two weeks younger than the other kittens, he quickly became a part of the family, but became particularly close to Dracula, a little black kitten. For more about Frankie and his friends, visit LoveMeow.com.

If you missed any of the stories featured on the Conscious Cat this week, here’s a recap: on Sunday, I wrote about the importance of learning to be still, on Monday, I told you about a study that found that cats benefit children with autism, on Tuesday, I reviewed the AirMax 10L Pro air purifier from Okaysou, on Wednesday, Allegra had fun with a crystal prism, on Thursday we featured gorgeous cat-themed ceramic tableware, and on Friday, we reviewed Feline Philosophy: Cats and the Meaning of Life.

Today’s video cracked me up. Visionary artist Jonathan created a short film after putting a camera on his model train to film the miniature town he created. In the process, he captured his cat Mittens wandering about, creating a vision of a world in which giant cats roam. Enjoy!

Have a great weekend!

GUESS the DOG BREED by Their BARK 🐶🔊 How Many Do You Know?
Crawfish and Commercials | The Vet Life
The Snuggery Singapore Premium Dog Care
What Does Jeremy Wade Do for ‘FUN’ When Not Fishing? | River Monsters Live
2022’s Purrfect Cities for Cat Lovers