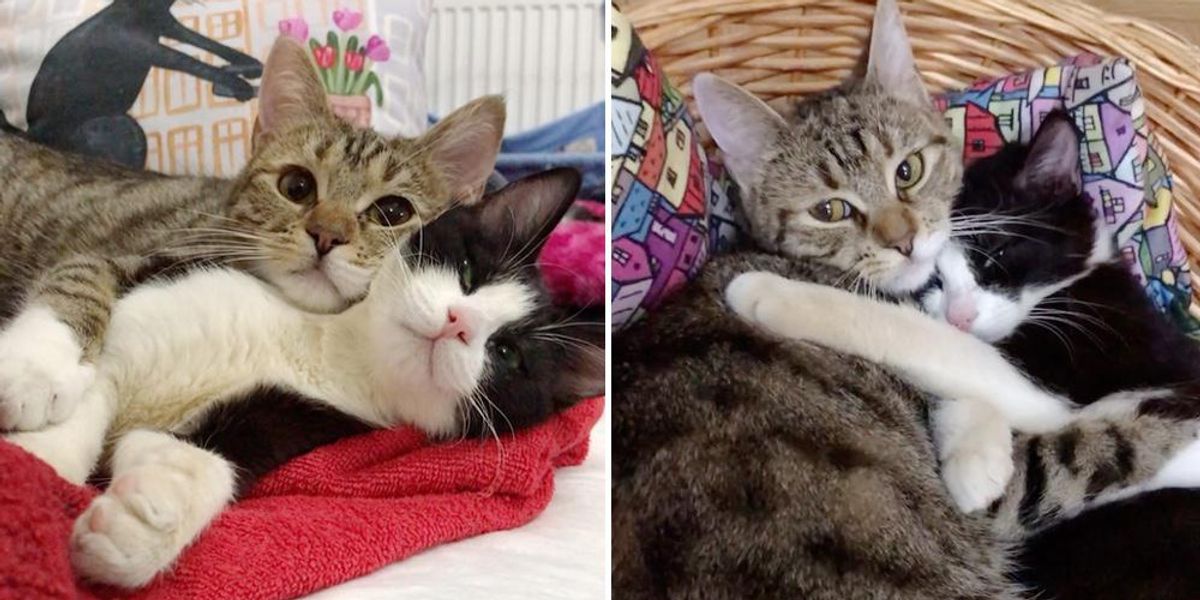 A cat with three paws took to a kitten who walks on his front legs. They instantly bonded.

A tuxedo kitten was brought to a clinic in Istanbul, Turkey a couple of months ago. He was paralyzed in his hind quarters and surrendered to the vet. Ahsen, an animal rescuer, was contacted and asked if she could help.

“I met him at the clinic, and he was receiving treatment for some injuries and infection. It would take time for him to heal so I offered to foster him and took him home,” Ahsen shared with Love Meow.

The little tuxedo had a lot of healing to do. After getting a bath and treatment, he took a long nap in a comfortable, warm bed, making up for lost sleep.

“I knew I would look after him for as long as it took. I was just happy and thankful to know that he no longer had to stay in a cage and that everything would be alright,” Ahsen said. “I thought maybe someday a family with experience with special needs cats would come along.”

She named the kitten Hayko, and spent the next few weeks nursing him back to health. When the kitten was ready to socialize with other cats, she introduced him to the rest of the feline crew in the house.

Right away, one of the resident kitties took a liking to Hayko as if she knew just what he needed.

A few weeks prior to Hayko’s arrival, Ahsen adopted a tabby from the same clinic. The kitten named Ekim was found outside as a stray. One of her front legs had to be removed due to an injury but her life was saved.

Ekim made a full recovery and adjusted to indoor life like a champ. Despite having three legs, she was able to navigate around the house and do anything just like other cats.

The tabby girl adores her family and other feline friends. When she heard Hayko’s cries and sensed that there was a new kitten in the house, she was ecstatic to meet him.

“It was definitely love at first sight.”

The tripod kitty took the tuxedo under her wing and watched over him every step of the way. “They like to spend time together, playing, grooming each other and sleeping in the same bed.”

The tabby makes sure that her best friend is always near and will come running to offer a cuddle whenever he needs company.

Watch the two best friends in this cute video:

The initial plan was to foster Hayko until they could find him the right home. Little did they know that the kitten had already found it.

Seeing how close the two buddies had become, they knew the kittens couldn’t be separated. Hayko officially joined their feline crew and became a permanent part of the family.

“We want to give him the best life he deserves so he will always be happy, safe and loved.”

Ekim has taken on the role of big sister and constantly showers her little brother with purrs and snuggles.

Hayko has been more active around the house, and tries to play and keep up with the tabby whenever she is up and running.

The sweet tuxedo can get around and play fetch like a pro using his two front legs. There’s no stopping him.

“I made a promise to Hayko two months ago that I would help him heal and improve his life. I’m so thankful every day that he’s making strides and thriving with us.”

Related story: Kitten With Only 2 Legs Hops Her Way into the Perfect Home

Furry Pet Hospital – Funny Pet care games And Treat Cute Animals
Are Microscopic Monsters Inside Jeremy?
Men Face Huge Fines For “Illegal Tidepooling” | North Woods Law
Kitten Spotted Underneath Homeowner’s Deck, is Welcomed in By a Cat and Raised as Her Own
Kitten Who Was Found Foraging for Food, Transforms into a Happy Indoor Cat in 3 Days