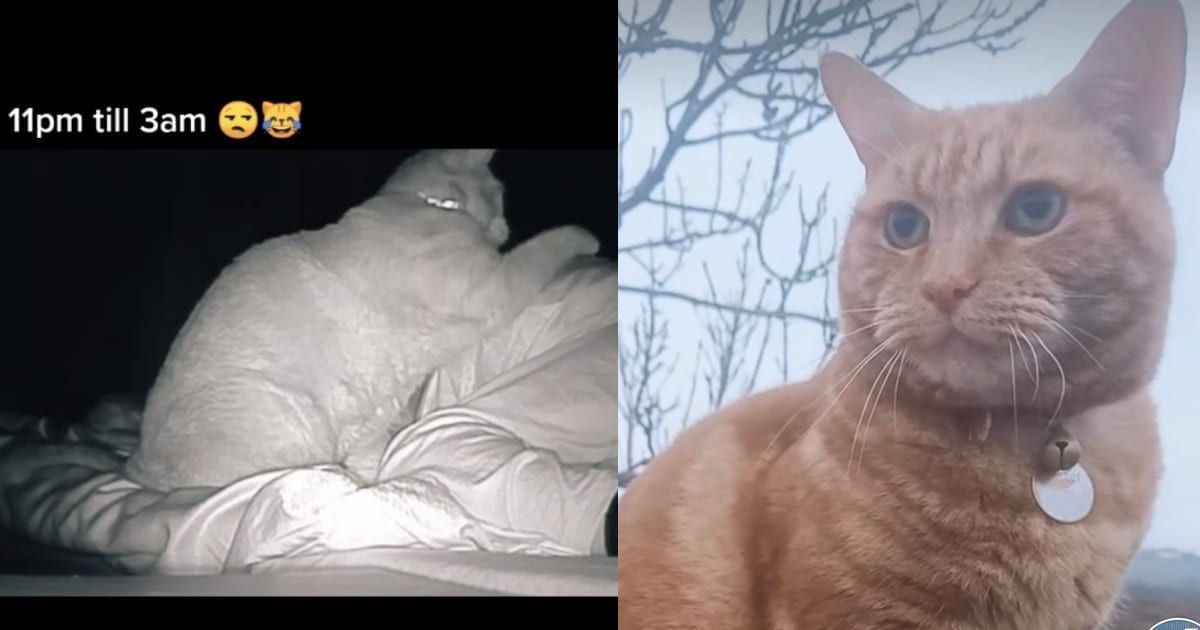 Cats love to prowl the night as we sleep. Mostly, they keep it to occasional singing interludes and toy crashes. And if they choose to settle in for a nap, it’s all quiet as they snuggle in close to you.

But what happens when a cat keeps being a cat and wants all the attention when it’s time to be sleeping?

It means a cat parent is never getting another restful night again, that’s what! And a cat mom on TikTok understands this problem all too well, taking to video to highlight her nighttime struggles with her cat Ginger.

Cat mom Susie shared in a TikTok video, “I’m so tired in the morning, I know I’m being woken up…”

She probably already had an idea who the culprit behind her nocturnal problem might be, but she set up a night vision camera “to find out what was going on…”

The camera revealed the source of her exhaustion and the culprit behind her restless sleep was her orange cat cutie!

Not So Restful Dreams

In the video, a set of glowing eyes emerges from the darkness, forming into a cat on the prowl. It’s Ginger the cat, coming to see if his mom is awake.

He sits nicely by her side at first, but when he determines she is indeed asleep, he decides this just won’t do. He gives Susie a soft poke of a paw. But she doesn’t wake and he taps her again. And again!

The first of the paw pats begin around 11 p.m. and continue until 3 a.m. That’s four hours of a tabby troubling his mom’s sleep. No wonder Susie was feeling exhausted every morning!

But what does one do about a nosy cat at nighttime?

Susie knew right away the solution wasn’t closing the door on her boy, posting in a second video, “I will NOT be locking him out of my bedroom.”

Agreed! Who would want to deny their kitty a spot in bed!

And while the second nocturnal video reveals she won’t be locking the cat out, she does reveal what her silly Ginger wants when he starts poking, “A CUDDLE!”

She gives her good boy a pat and a hug and he settles in for “2 hours of snuggies,” leaving Susie to get the rest she needs!

Who is this Silly Ginger?

Ginger and his brother Brock came to live with Susie when they were only 8-weeks-old. Now 16-years-old, the cat brothers are “very much loved members of the family.”

As Susie explained to Bored Panda, “Ginger is definitely the needy one out of them both.”

But cat lovers don’t mind a needy cat. In fact, we love a cat who wants us around all the time, even if he makes bedtime less than dreamy!