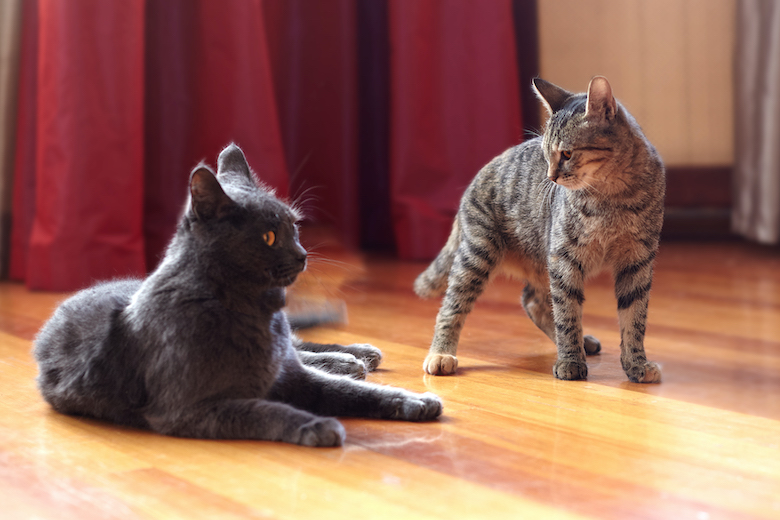 Maybe you thought your only-child cat could use a friend. Or perhaps you went shopping for food and toys for your current kitty and came home with adoption papers for a rescue cat you met while perusing the aisles.

You hoped your cats would become fast friends, but they didn’t. And now, you find yourself living from one catfight to the next.

Related: How to Introduce Your Cat to a New Cat

“If you have two cats that don’t get along, it creates a 24/7 source of stress for both the pet owner and the pets involved,” says Shadi Ireifej, DVM DACVS, the co-founder and chief medical officer for VetTriage.

Nobody benefits from that. But is it so bad that your cats need to split up — permanently? Rehoming a cat or taking them to a shelter or rescue is a tough call. But sometimes, it’s the best one for you and both cats. Dr. Ireifej shared what steps to take before choosing to break up your cats, when to stop, and how to rehome a cat safely.

How to help your cats get along

Before you rehome a cat, there are a few things you can try to help them reconcile. Dr. Ireifej suggests talking to your vet about putting one or both cats on Prozac or trying a pheromone plug-in, which may help calm them. Calmer cats are often friendlier cats.

You can also try re-introducing them. Put the cats in separate rooms and have them smell one another through a door. Give each a blanket with the other’s scent on it. If that’s going well for a week or more, Dr. Ireifej suggests bringing one cat out in a large dog crate. That way, they can see each other but won’t get into a fight. Give them high-quality treats, so they associate good things with one another. Eventually, you’ll hopefully be able to have them at the very least co-exist in the same room.

You can bring in a behavioral specialist to help you. Dr. Ireifej advises asking your vet for a recommendation.

If they can’t, and you have space to keep them separate permanently (such as having one cat live upstairs and another downstairs), you can consider doing that.

When it’s time for your cats to get a divorce

Despite your best efforts, some cat friendships just weren’t meant to be.

“As a veterinarian, my biggest fear is the physical trauma,” Dr. Ireifej says. “If the cats are having physical altercations and you find yourself going to the vet a lot or worried you’re going to come home and find something worse [it’s time to rehome one].”

How to rehome a cat

First, you’ll need to pick which cat is headed to a new home.

Dr. Ireifej suggests asking yourself the tough question: Do I love one more? It sounds terrible, but Dr. Ireifej tells people to go easy on themselves.

“It’s OK to say you like one cat more than the others,” he says. “If there’s one you like, have more history with, have had longer, that’s the one you keep.”

If you want to get another cat and one kitty is more amicable to other pets, perhaps you’ll choose that one. You can also look at it from an adoptability standpoint, particularly if you have two cats with a large age gap in between them.

“It’s going to be much harder to rehome [an older cat],” Dr. Ireifej says. “If the person is torn, look at it from the perspective of which cat is most likely to get a new home.”

You want to set your cat up for the best chance of finding a new home. If you adopted the cat from a rescue, that organization will typically take the kitty back. You can also look for reputable rescues in your area.

“If there’s a way you can find a local rescue organization who actively tries to save them all, that’s probably the place to go,” Dr. Ireifej says. “That’s a way to minimize a cat being euthanized or staying in an enclosure for a long time.”

You can also ask around and see if a trusted family member or friend is willing to take the cat.

Rehoming a pet can feel like a personal failure. But if the situation was dangerous and you tried everything you could, give yourself a break.

Read Next: Do Cats Get Lonely or Are They Fine Without Other Cats?

What do you like or dislike about this dog training series? #DogTraining 
Just One Bite Could Infect This Cat With FIV | My Cat From Hell
FUNNIEST PETS & CUTE ANIMALS Videos Ever! 🐶
Hassan Whiteside’s BIG Miami Tank
What Does Jeremy Wade Do for ‘FUN’ When Not Fishing? | River Monsters Live